Energy News Beat Publishers Note (ENB): Today is a great day. We get to record one of our regular podcasts in a series with Ryan Ray, President, War Room Media, and cover the power issues in China! More on this story when the podcast is released.

There’s a new fixture along the alleyways of Guangzhou — the portable generator.

Videos on China’s popular social media app WeChat show blue and red generators spinning and hissing smoke outside of crowded clothing factories in the city at the center of the nation’s industrial heartland. The reason for their popularity? A suddenly unreliable power grid.

“The power supply in Guangdong has had some problems recently, and in some cities industrial plants have had to move their working time to off-peak hours,” Yu Zhai, an analyst with Wood Mackenzie Ltd., said by phone. “This electricity shortage could be a problem from now through the summer.”

Outages aren’t just a problem for mainland China. Just months after severe winter weather crippled power supplies across Northeast Asia, the specter of shortages is also rising again in Japan and Taiwan. Hot weather is layering air-conditioning demand on already-high industrial use as economies recover from the pandemic, while supply is constrained from nuclear, hydropower and coal plants.

In China, the export- and heavy industry-led rebound has caused a surge in electricity use, with consumption climbing 20% through April compared with last year, and up 15% from 2019 levels, when Covid-19 wasn’t a factor. Temperatures in Guangdong, in the southern region of the country, have also been higher than normal. 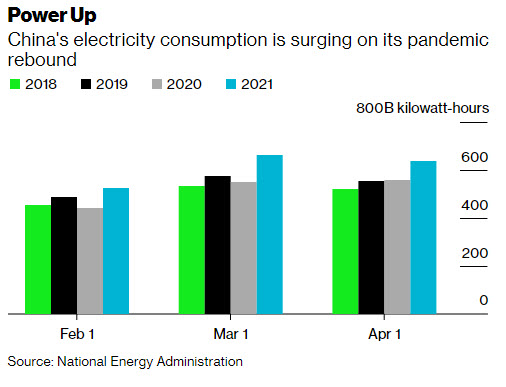 At the same time, there’s been a late start to the wet season, leaving hydropower reservoirs low. Coal prices have also surged as mining output has dropped amid a government-led safety campaign, making generators less keen to ramp up thermal power output.

The electricity shortages, caused in part by the resurgence in economic activity, are causing disruptions to businesses that threaten to slow that very recovery.

In some parts of Guangdong, which has a higher gross domestic product than Australia, some factories are only being allowed to operate three days a week, hurting their ability to fulfill orders, news website Jiemian reported. Such measures to stagger power consumption could last three months.

About 100 of the 250 members of the South China chapter of the European Chamber of Commerce have been affected by the shortages, said Klaus Zenkel, board chairman. Companies ranging from lab device makers to heavy metal manufacturers to elevator producers have had to cut production.

Members are “kind of feeling unhappy” about the energy crunch, he said. “They think this is not the right way how to handle this. There should be other ways because there’s a lot of energy wastage in other areas, and there’s no need to go into the manufacturing.”

“I am so tired,” said one anonymous business owner posting on Weibo, who complained about the need to buy an electric generator and asked patience from customers after a power outage at an industrial park.

In Japan, the summer electricity supply will be the tightest in years as several thermal power plants have been idled, the government warned earlier this month. Japan’s national meteorologist expects unseasonably hot weather through August, according to a forecast published earlier this week. In order to avoid any potential blackouts, the government has requested that utilities stock up on fuel supplies and consumers conserve electricity. 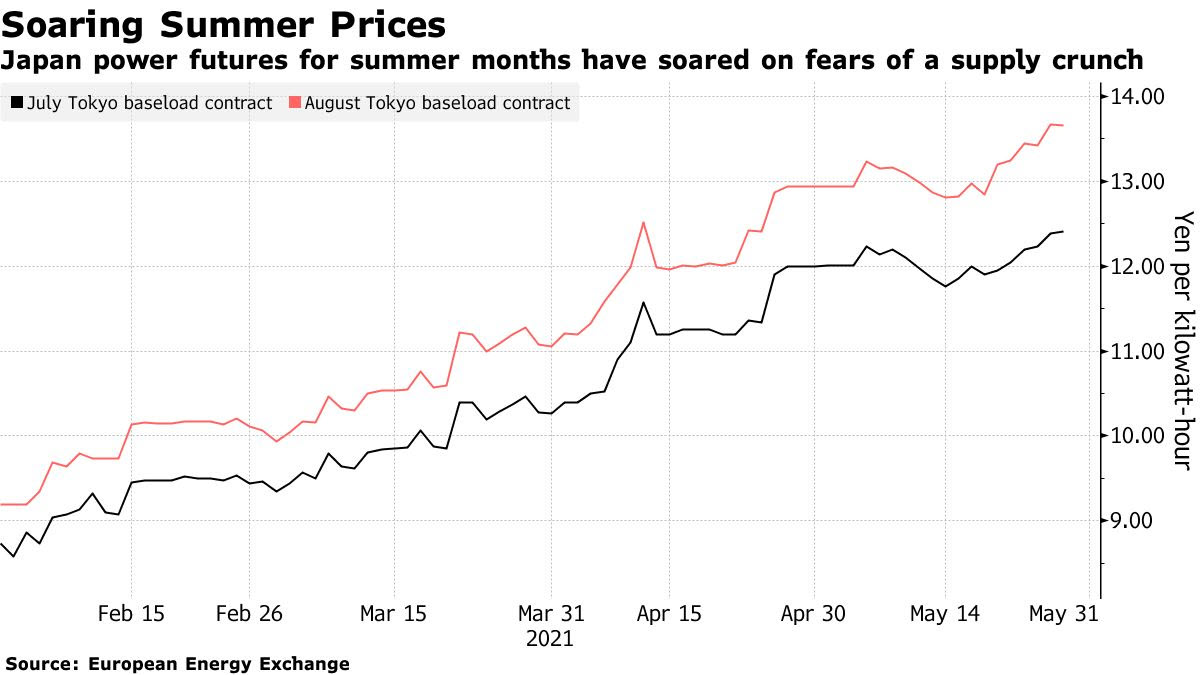 Japan power futures contracts for July and August delivery have surged by roughly 20% over the last two months in anticipation of a supply crunch. Hokkaido Electric Power Co., which operates in Japan’s northernmost island, expects to provide as much as 14% more power capacity to the main island of Honshu this summer compared to last year, the Nikkei newspaper reported.

In Taiwan, home to the world’s largest semiconductor manufacturer, two blackouts have hit the island in the same week earlier this month. The state-owned power company has issued a warning of tight supply for six of the next seven days as Taiwan struggles with a water shortage.

The power shortages are raising concerns that Taipei’s ambitious plan to decommission all its nuclear power plants by 2025 and replace them with gas and renewable energy could be delayed.

Nigerian President Muhammadu Buhari reversed a government decision to revoke four oil permits from a unit of China’s Sinopec. Buhari “approved the restoration” of the licenses to Addax Petroleum Corp. as part of his commitment […]

Is China piling into the crude oil market again? A snapshot of where the world’s supertankers are headed suggests it may well be. The number the vessels sailing toward the shores of world’s largest importer […]

China continues to ratchet-up its carbon goals with the promise of a larger slice of power generation devoted to clean energy. The National Energy Administration has circulated a 10-year renewables proposal that’s eye-catching on two fronts, according […]