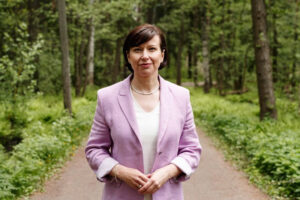 One of the newest faces at Exxon Mobil Corp., Kaisa Hietala, wants to make sure she’s not misunderstood as she’s propelled to sudden fame in a battle between climate activists and the oil industry.

The 50-year-old Finn — unknown to corporate America until last month — won her boardroom seat at Exxon after a campaign by activist hedge fund Engine No. 1 convinced BlackRock Inc., Vanguard Group Inc. and other key investors to back her in a contentious vote.

Speaking in an interview with Bloomberg, Hietala says she understands how important it is to look after a company’s “traditional, existing business.” That’s after devoting her career to helping the energy industry move away from fossil fuels and over to renewables.

“I’m a realist. I know that things won’t change to fossil-free overnight,” she said. “Companies need to ensure their current business stays in a very good shape and simultaneously build a strategy to lay out their own path to the future.”

Getting the energy industry to move away from fossil fuels is a gradual shift, Hietala said, and companies need to consider their roles “20 or 30 years from now.”

“No one can exactly predict the moment” when oil and gas will no longer be part of the economy, she said.

Hietala’s comments provide some of the earliest insight into how she and the two other directors successfully nominated by Engine No. 1 will likely approach their new roles. The shake-up of the oil giant’s board is a watershed moment for Exxon, which had told shareholders to shun the nominees and called them “unqualified.” It’s also being hailed as a warning to the rest of the oil industry that activism is a growing force with the potential to upend corporate agendas.

“If this can happen at the largest U.S. energy company, arguably no public company’s strategy is immune from ESG influence,” analysts at Morgan Stanley wrote in a report June 3.

Engine No. 1 was a little-known investment firm until Exxon investors voted to appoint Hietala and two of its other nominees: veteran oil industry executive Gregory Goff and Alexander Karsner, senior strategist at X, the innovation lab run by Alphabet Inc. (the final confirmation of the vote count is still pending).

The hedge fund wants Exxon to overhaul its strategy, cut costs and come up with a plan to address climate change. Unlike European peers BP Plc and Royal Dutch Shell Plc, Exxon hasn’t set a target for net-zero emissions, and instead has promoted its efforts on carbon-capture technology. The company has been dogged by poor financial performance. Last year Exxon posted its first annual loss in at least four decades, and it has been forced to scale back earlier ambitious expansion plans.

Hietala works at Gaia Consulting Oy, which helps companies build sustainable businesses. Before joining Gaia in 2019, Hietala had a roughly 20-year career at Neste Oyj, a Finnish oil refiner that’s now making most of its profit from biofuels. She started in its oil-trading operations before climbing the ranks, pushing Neste to invest in renewable diesel and making the business commercially viable.

Hietala is widely credited for Neste’s successful pivot to becoming the world’s biggest maker of renewable diesel. But it wasn’t a painless process: a decade ago the biofuel unit’s revenue was growing, but so were its losses. Hietala said one of her key learnings at Neste was that “every day is earnings day” and that the core business needs to be taken care of amid transformation.

She says long-term change starts with a company’s board and management.

“They need to be the ones who want this to happen,” Hietala said.

There’s no single formula for pushing through an energy transformation, according to Hietala, who declined to comment specifically on her plans at Exxon. The board’s role, she says, is “important” in forging a common view.

The trained scientist, licensed personal trainer and wellbeing aficionado who insists on eight hours of sleep each night, says she relies on a multidisciplinary approach and an understanding of the entire energy sector, as well as the skillset needed to renew a corporation’s business. The idea is to bring about change through agility in developing, testing, piloting and commercialization of new products. And owners, employees and clients all need to stay engaged through the process, she said.

It’s not just talk. “I have the practical experience to back up my words,” Hietala says.

“I’m impatient to see alternatives being considered and solutions sought, and plans and strategies made,” she said. “I don’t think being passive will yield as good results for companies as being proactive and pushing forward in the selected direction.”

Colonial Restarts After Cyberattack But Fuel Curbs to Linger

The largest gasoline pipeline in the U.S. is returning to service following a cyberattack that took the fuel artery offline for five days, offering hope that fuel shortages in several states will soon come to an […]

Puget Sound Energy (PSE), PacifiCorp, Avista and Portland General Electric (PGE) filed a lawsuit against Northwestern Corporation and Talen Energy in the US District Court for the District of Montana on 4 May, saying SB265 violates both […]

Ovintiv dramatically underperforms peers and the energy sector Total Shareholder Return of (84.8%) since the current CEO joined in 2013; net debt increased 53% and $12.7B in impairment charges were recorded; CEO awarded over $75M […]