The threat of worldwide inflation fear, increased demand, the lower demand are all the reasons for the increased rally for oil prices. Just in the last year, we have seen Iranian attacks on oil tankers and the markets did not even bat an eye. So a strike in Syria and no evidence that it went over the border to Iran to influence will not impact oil let alone the Iranian Nuclear talks.

As we have stated on our podcasts, and articles, Iran has done a great job protecting cash flow through oil sales outside of sanctions. Iran has made the impact of the sanctions to their cash flow marginalized. Iran does not care if there is a nuclear deal, and has proven this in the past by not ever slowing Uranium enrichment since 2015.

One source today from Bloomberg:

The U.S. launched airstrikes against Iran-backed militias in Iraq and Syria on Sunday evening, which may complicate negotiations to revive a 2015 nuclear deal between Tehran and world powers.

The Pentagon said the strikes, which hit operational and weapons storage facilities, were a response to attacks on U.S. interests and were a “necessary, appropriate and deliberate action designed to limit the risk of escalation.”

There was no immediate reaction from Iran’s government or from President-elect Ebrahim Raisi, who comes to power in August. 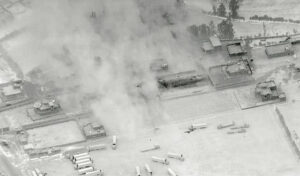 Iran, the U.S., the European Union and others have been locked in weeks of talks in Vienna to try to revive the 2015 accord, which Washington withdrew from in 2018. A new deal would see Iran’s atomic activities curbed in return for U.S. sanctions relief. It’s unclear when the next — and seventh — round of talks will begin.

OPEC+ meets Thursday with Russia and Saudi Arabia attending and sources indicate the cartel may table an additional increase in output to support prices and benefit the global economy. For Saudi Arabia, the increasing output provides an opportunity to replace some of the output they reduced earlier to help hold prices stable.

Iran’s capabilities for oil production are not totally known, but everyone agrees that they are increasing production regardless of production quotas.

The global shipping industry needs to work more closely with the governance framework of affected countries and ensure greater transparency and accountability for cargo movements, especially in light of recent high-profile accidents involving defective or […]

It isn’t OPEC if it isn’t drama. Yet, what’s playing out now on the stage of this expanded 23-nation coalition of oil producing countries that calls itself OPEC+ is too much drama – even for […]

Climate Policies Could Hand Power and Profits Back to OPEC