Energy News Beat Publishers Note (ENB): Rosneft is dead-on right! The inability of the world to have a realistic conversation of the importance of a “Balanced Diet of Power” is disappointing at best. ENB has defined the “Balanced Diet of Power” as delivering energy to the consumers at the lowest kWh, while taking careful regards for the environment. So, let’s take care of the environment while taking care of the world’s population’s access to clean energy. That really means the use of all forms of energy. We saw the interdependence in Texas this year. The disproportionately impacted communities always end up paying for everything. That is not a good thing, and buckle up as the high cost of oil is on the horizon.

“The world risks a severe deficit of oil and gas,” Rosneft CEO Igor Sechin said Saturday at the St. Petersburg International Economic Forum. “The world consumes oil, but isn’t ready to invest in it.”

His comments echo those of Russian Deputy Prime Minister Alexander Novak, who this week rejected calls for a rapid shift away from oil and gas, saying starving the industry of investment would harm the global economy. But fossil-fuel producers are facing mounting pressure to switch to cleaner forms of energy as governments step up efforts to prevent damaging climate change.

“It shouldn’t be about rejecting oil, but about rejecting crude from environmentally unfriendly projects,” Sechin said on an energy panel that also included BP Plc CEO Bernard Looney and Glencore Plc boss Ivan Glasenberg. “Oil consumption will continue to grow despite a relative drop in its share in the global energy mix.” 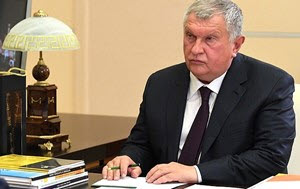 The discussion comes in the wake of a controversial road map published in May by the International Energy Agency, which urged an end to new oil and gas investments to avert disastrous climate change. The report was dismissed by petrostates Saudi Arabia and Russia, with Novak warning of skyrocketing prices. Sechin said it will still take decades to develop economically efficient green technologies.

“Some ecologists and politicians urge for a hasty energy transition, yet it requires an unrealistically fast launch of renewable energy sources and faces issues with storage, ensuring reliability and stability of power generation,” he said at the forum.

Instead, oil and gas producers must allocate sufficient funds to avoid further depleting resources that are already dwindling in many regions and threatening the future stability of supply, he said.

“Based on existing estimates, about $17 trillion should be invested in the global oil and gas sector to support current output levels until 2040,” the CEO said. “That’s about a third of all global energy investments.”

The International Energy Agency, which has stepped up its efforts to become a major green energy supporter, appears to have forgotten the reason it was set up as an agency in the first place. In its […]

Russia would support broadly stable oil output by OPEC+ group of leading global oil producers in May, while seeking a relatively small output hike for itself to meet the rising seasonal demand, a source familiar […]

BP Plc offered more evidence that Big Oil has barely begun to heal the wounds from last year’s historic slump. The Western world’s largest energy producers were supposed to be sailing into the fourth-quarter earnings season […]