A recent survey indicates that the coal industry in the United States is showing a marked upsurge in demand. In fact, it has been revealed that the nation’s output of this fossil fuel is expected to rise by around 10% in the coming four years. This year, the United States may produce as much as 900 million tons of coal. That’s 30 million more than last year – and the largest production level since the 1990s.

Coal demand is topping expectations, according to the annual Mining Economic Data Book, which tracks economic activity and production in the coal, oil, natural gas, and nuclear industries. Last year was the highest for U.S. coal production since 1980, with output rising 26 percent over 2013 levels, the Energy Information Administration said this week. The book projects industrial demand will continue to rise this year as utilities ramp up spending on clean energy, including greater use of coal for electricity. 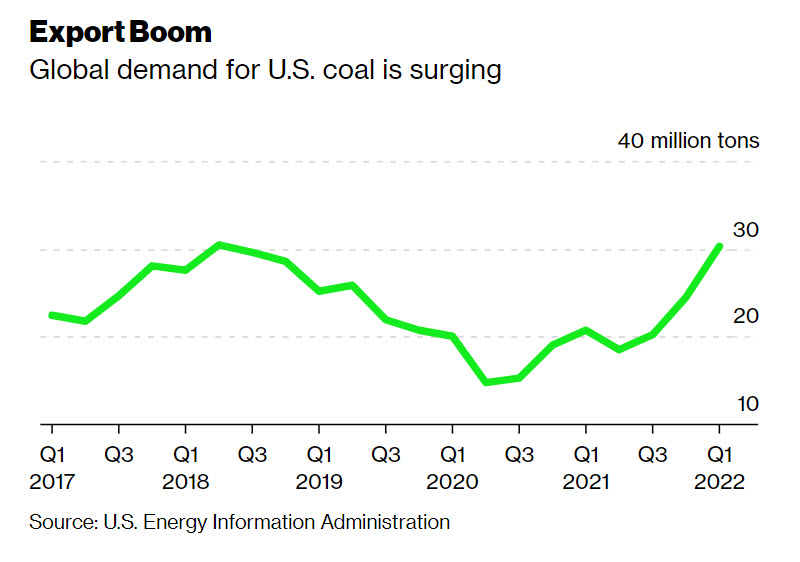 From Bloomberg today: Everything that could happen that’s positive from the demand standpoint is happening,” said Andrew Cosgrove, a mining analyst with Bloomberg Intelligence. “The stars are aligning.”

That growing appetite will help boost U.S. exports of the fuel by 21% this year, and another 19% in 2022, the Energy Department said Wednesday in its latest short-term outlook report. The department said its projections are based on forecasting firm IHS Markit’s projection that the world’s largest economy will grow by 7.4% in 2021.

And the coal boom is unlikely to lose momentum anytime soon. As long as economic growth remains robust, so too will energy demand, according to Lucas Pipes, an analyst at B. Riley Securities.

The Bottom Line: Worldwide energy demand is up and it will be filled by the lowest cost of energy available to the consumers except for mandates from governments. What does this mean for our “Green New Deal” is that we are going backward while creating worldwide dept that even our descendants will not be able to recover. Let’s start with the United States and have open dialogues with everyone about the best path forward on the “Balanced Diet of Power’. A balanced diet could include fossil, renewables, and nuclear in all types.  Being good stewards of the earth also means producing the energy with the least impact on the environment. Simply put: Fiscally producing the “Balanced Diet of Power” at the lowest impact to our environment.

Why The Green Transition Can’t Happen Without Natural Gas

Just as natural gas has competed with coal as the prime fuel for electricity in the last decades, renewables are putting pressure on the blue, clean-burning source of energy. The competition is fierce and will likely […]

Biden is calling for sweeping investment in electric vehicles, renewable power and the electric grid as part of a broad blueprint to bolster the U.S. economy while combating climate change. The president’s plans, part of […]

Magnolia Oil & Gas Corporation (“Magnolia,” “we,” “our,” or the “Company”) (NYSE: MGY) today announced its financial and operational results for the fourth quarter and full year 2020. Fourth Quarter Summary Financial Results: (In millions, […]